In an average year, Apple holds three to four events. There’s usually a spring event in March, the Worldwide Developers Conference in June, a September event that’s focused on iPhone and Apple Watch, and sometimes an October event if there are iPads or Macs expected in the fall. 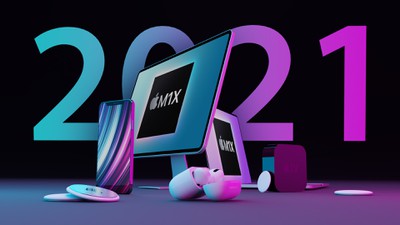 In this guide, we’re keeping track of all of the Apple events that are on the horizon and what we’re expecting to see at each one, so make sure to check back in regularly.

Apple held an event in April 2021 and introduced AirTags, new iMac models, an updated Apple TV 4K, and refreshed versions of the 11 and 12.9-inch iPad Pro.

Apple held the Worldwide Developers Conference in June, debuting iOS 15, iPadOS 15, watchOS 8, tvOS 15, and macOS 12 Monterey. Details on everything new in these software updates can be found in our dedicated roundups.

No new hardware was introduced at WWDC, with Apple instead focusing on the new software updates that are set to be released in the fall.

Apple is holding a “California Streaming” event on Tuesday, September 14. Like last year’s fall event, this will be held virtually and is set to kick off at 10:00 a.m. Pacific Time. This event is expected to focus on the iPhone 13 and the Apple Watch Series 7, with details on what to expect below.

We’re expecting four iPhone 13 models in the same sizes as the iPhone 12 models, and Apple is planning to use the same general design. 120Hz ProMotion displays are expected, as are camera improvements, an A15 chip, and faster 5G. The iPhone 13 models will feature a smaller notch design, which will be one of the biggest design tweaks. Battery life improvements are also expected, as are some notable camera enhancements.

Apple introduces new Apple Watch models on a yearly basis, and this year, we’re expecting an updated design for the first time in several years. The Apple Watch is expected to feature smaller bezels and a flat-edged design that could be similar to the design of the iPhone 12. The new Apple Watch models will come in new 41mm and 45mm size options, and no new health features are expected, though it will get a faster chip and new wireless capabilities.

Apple is working on a new version of the AirPods, which will look similar to the AirPods Pro, but without Active Noise Cancellation, allowing Apple to sell them at a lower price point. There were multiple rumors suggesting the AirPods 3 would launch in the first half of 2021, but that information was inaccurate and it now appears AirPods are launching in the third quarter. Mass production is set to begin in August, which means we could see a September launch alongside new iPhones.

Apple often holds a second fall event after its September event, sometimes focused on iPads or Macs. These events have taken place in October and November in the past, so we could see a late fall event this year as well for products that don’t come out at the September event. The MacBook Pro is expected this fall, and it’s such a significant update that it’s likely to have its own event separate from the iPhone event at some point between September and October.

Apple is working on 14 and 16-inch MacBook Pro models that are expected in the third quarter of 2021. The new machines will feature the most significant design overhaul to the MacBook Pro line that we’ve seen since 2016, introducing a flat-edged design. The new MacBook Pros will charge over MagSafe, will have more ports, and will have physical function keys instead of a Touch Bar. It will use upgraded M1X Apple silicon chips with a 10-core CPU that features eight high-performance cores and two energy-efficient cores, along with 16-core or 32-core GPU options and support for up to 64GB RAM.

There’s a new version of the iPad mini coming in 2021, and there have been rumors that it could feature a larger 8.5 to 9-inch display. The refreshed iPad mini will continue to feature a Lightning port, and if there’s a larger display, it will be implemented through a reduction in bezel size. It may also use a Touch ID power button, allowing for a full-screen design.

Apple is developing a ninth-generation version of the low-cost iPad with a 10.2-inch display and a thinner build (6.3mm) that’s similar to the now-discontinued third-generation iPad Air.

Apple is developing a high-end version of the Mac mini, which will feature additional ports and a more powerful Apple silicon chip. It will include an improved version of the M1 chip with a 10-core CPU that has eight high-performance cores and two energy-efficient cores, plus 16-core or 32-core GPU options. The Apple silicon chip will support up to 64GB RAM and four Thunderbolt ports, and since it is expected to be the same chip as the MacBook Pro, the new Mac mini could come out in the fall.

There are several other products rumored to be in the works for 2021 and 2022, but we don’t know exactly when these updates are coming.

Introducing M1 Pro and M1 Max: the most powerful chips Apple has ever built

Android 12 Beta: Designed for you